Last week Post Magazine broke the news that Pukka Insurance had hit pause on new business and that it would likely be April when the specialist motor MGA returns to “firing on all cylinders”.

The comments by CEO Sam White were refreshingly honest and open, apologising to broker partners and pledging new controls on volume restrictions in the future.

White told Post that its capacity with New India would replenish in April, after a period of substantial growth which has seen it grow from £30m GWP to £70m GWP in three years.

So what effect could Pukka’s new business hiatus have in the market, and how big was it?

In car insurance, a newer line for Pukka, it was behind 3% of T1-5 quotes and 0.4% of Rank 1 quotes. This made it the 24th most competitive underwriter for car insurance. 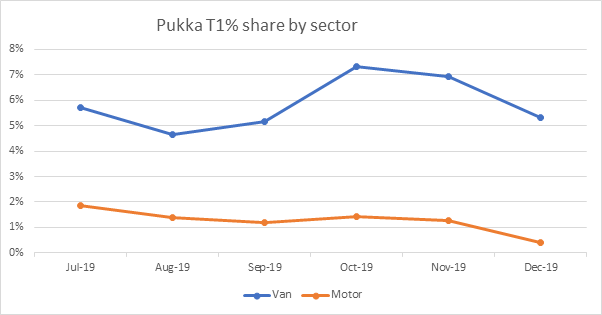 In a market as fragmented and competitive as motor insurance, it is hard to imagine that Pukka’s pause will have a material shift on rates.

It works with several brokers who will have other underwriters on their panel for whom this could present an opportunity to step up.

Download our Van Insurance Price Index to gain insight into market movements, benchmark the major van insurance brands and help you understand the data behind the results.