After an initial flurry of price hikes, it looks like the pace of increase in motor insurance is starting to level off, with some insurers even rowing back on the initial increases they implemented.

The bulk of huge pricing increases since February’s announcement that the Ogden Discount Rate would be cut from 2.5% to -0.75% appear to have been an immediate knock-on effect of the cut. Hikes in claims costs and insurance premium tax have not helped either, driving shopping around rates to near record highs.

The path to record motor premiums however, is not an even one. In fact, three companies have decreased their rates overall since the Ogden changes, by 4.6%, 2.2% and 0.2% overall. In those particular cases, it equated to £87, £7 and £6 respectively.

At an overall market level, we can see premiums moved at small increments in the lead up to the announcement, followed by much swifter and sustained upward movement. Comparing the Top 5 prices across Price Comparison Websites (PCWs) and Direct insurers, it is in the Direct space that pricing has risen consistently faster. Aggregators have increased prices 15.8% since July 2016, while Directs rose 22.5% in the same period, with much of the increase following the discount rate cut.

How individual companies reacted both immediately after the announcement – and five months later – is interesting. We continue to see huge differences in rate responses to Ogden at the company level, both up and down.

On the one hand, in March-April many specialist and telematics providers either applied very little additional rate, or even reduced pricing by over 2%. This includes some smaller brands who attempted to gain market share by improving their competitive position.

By contrast, we also saw increases of almost 20%. Other brands adopted a ‘wait and see’ approach. Overall, the average rate change in March-April was 3.6% and the median was 3.3%. 11% of insurers did not adjust rating in the period, while 2.1% reduced their prices. 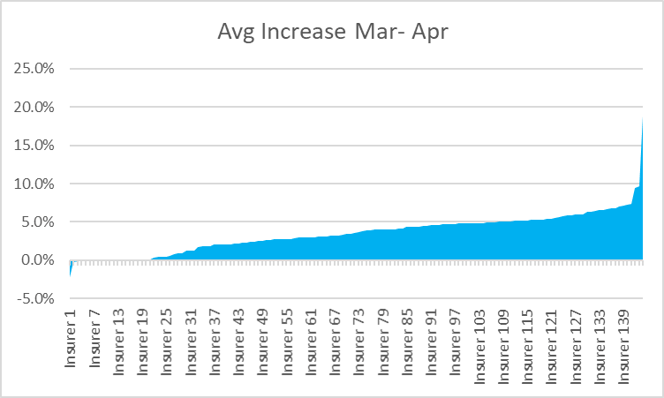 More recently, we have seen polarisation on rate. We continue to see some large pricing increases for some insurers either trying to make up for lost time, or to correct some lighter pricing decisions.

At the same time, more companies appear to be realising the pricing hikes they put in place following Ogden have had a greater than anticipated effect on their competitiveness, so corrective work is being implemented. The average rate change from May-July was 1.4% and the median was 0.97%. 9.6% of insurers did not adjust rating in the period, and 9.6% reduced their prices.

In the absence of another seismic event in the remaining months of the year, we do not expect any substantial price rises to come any time soon. Our expectation is a return to the standard increases of between 1 and 2%.

Whether it’s Ogden, IPT, claim costs or other factors, pricing is always at the forefront of tackling these industry obstacles, and is always a game played on a knife edge.

Having access to reliable and actionable data and a strong pricing strategy will mean you can play this game well, and be better equipped for the fallout – however positive or negative it may be.

The front page of Saturday’s Daily Mail highlighted the differences people are paying for their motor insurance dependin...

It has been one month since the Ogden discount rate change from 2.5% to -0.75% was announced and the spike in premiums i...