The front page of Saturday’s Daily Mail highlighted the differences people are paying for their motor insurance depending on how they pay it. Those who pay once, pay less.

The Mail, perhaps unsurprisingly, called it a ‘Rip Off’ and highlighted that some insurance brands charge as much as a 44.7% APR equivalent.

A Labour MP duly obliged with a comment that the industry was “disgraceful” for “profiteering from those who need to pay monthly.”

According to Consumer Intelligence research, the proportion of those who pay in instalments has increased from 31% in 2013 to 35% this year. 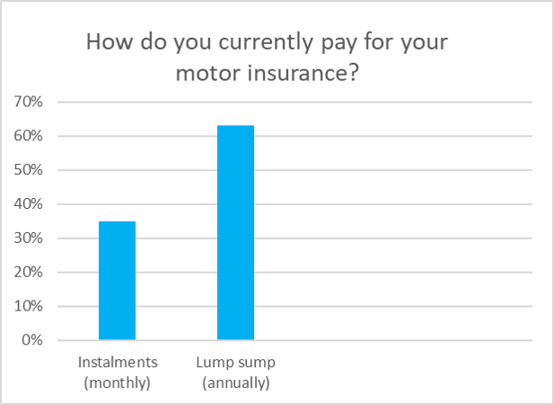 But our research found that customers are far less scandalised by the extra charges – which are far from new – than the Daily Mail suggests.

Firstly, monthly payers are highly aware of their arrangements. 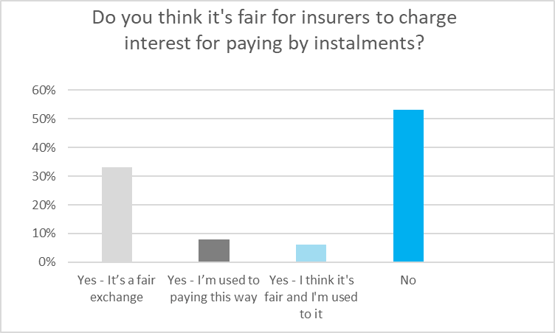 Given the inherent distrust of financial services brands, the last figure is especially telling. It confirms that consumers have far greater concerns than paying interest on their insurance. Many, in fact, consider it a fair exchange.

Our findings also called other assumptions on buying behaviour into question. More than half of those who pay by instalment appear to do so by choice, with 45% citing not being able to afford the lump sum as the reason for paying monthly.

Some insurers do not offer payment by instalment, and an argument can be made that those who do are offering a consumer service given consumers cannot pay monthly using a credit card. On the other hand, some insurers also offer an interest-free instalment plan, as confirmed by 14% of our respondents.

Concerns over the wide range in APRs appears to be muted given high levels of awareness of the exact interest rate, and the fact that in total around half (49%) think they are paying 10% interest or less.

The attitudes of the remaining two thirds of consumers who pay their motor insurance by lump sum reinforces the notion that consumers are willing to borrow to buy insurance. Half of annual payers use a credit card to pay for their insurance. This is more than any other method of payment and a big increase on 2013. This could be because cash-strapped drivers have realised it’s often cheaper to borrow money on a credit card than from their insurer.

Research from Consumer Intelligence last month also showed that 44% of credit card holders pay interest on their bill rather than paying it off in full each month.

As a result, around one in two consumers are paying interest on their motor insurance – one way or another.

Consumers may be both well aware of (and willing to pay) interest on their insurance, but what they may not know about is how the chosen method can affect the premium itself, not the total cost. Some insurers use frequency of payment as part of their risk criteria.

Instalment interest is also a vital revenue stream for some companies, in particular brokers. Some will discount the underlying premium in order to acquire the business. In those instances, consumers can try to ‘beat the system’ by saying they want to pay monthly to secure the lowest base premium, but then pay the entire charge up front.

Although most consumers felt brands did a good job communicating extra charges, the headlines illustrate that the more opaque complexities of pricing remain low hanging fruit for anyone looking to attack the insurance industry.

The motor insurance market is once again a stir with changing consumer behaviour and emerging business models set to challenge the status quo. Insurers need to make sure they keep their fingers on the pulse and remain adaptable to changing consumer needs and expectations.

Download the Consumer Shopping Behaviour for Motor Insurance Whitepaper to understand the importance of being adaptable to changing market environments and consumer needs.

It has been one month since the Ogden discount rate change from 2.5% to -0.75% was announced and the spike in premiums i...

After an initial flurry of price hikes, it looks like the pace of increase in motor insurance is starting to level off, ...