Nearly 1 in 5 people have committed insurance fraud or admit they would be willing to do so, a nationally representative survey of 1,003 adults across the UK shows.

Some 17% admitted that they would make up or exaggerate a claim, or had already done so, the poll conducted by Consumer Intelligence in June 2022 shows.

The results mark a deterioration from last year, when only 1 in 10 said it was something they’d consider.

For many Brits, fraud appears to be very much a grey area.

Only 87% think that entirely making up a claim is fraud – meaning 13% do not understand that a fake insurance claim is a criminal offence. This is also a drop on the 91% in 2021 who thought fabricated claims were fraudulent.

Four-in-five people thought adding a few extra items to a contents claim was fraud, and 74% said they thought inaccuracies about who the main driver was or where the car would be kept overnight counted. Only 88% thought going as far to crash a car deliberately was actually fraudulent. 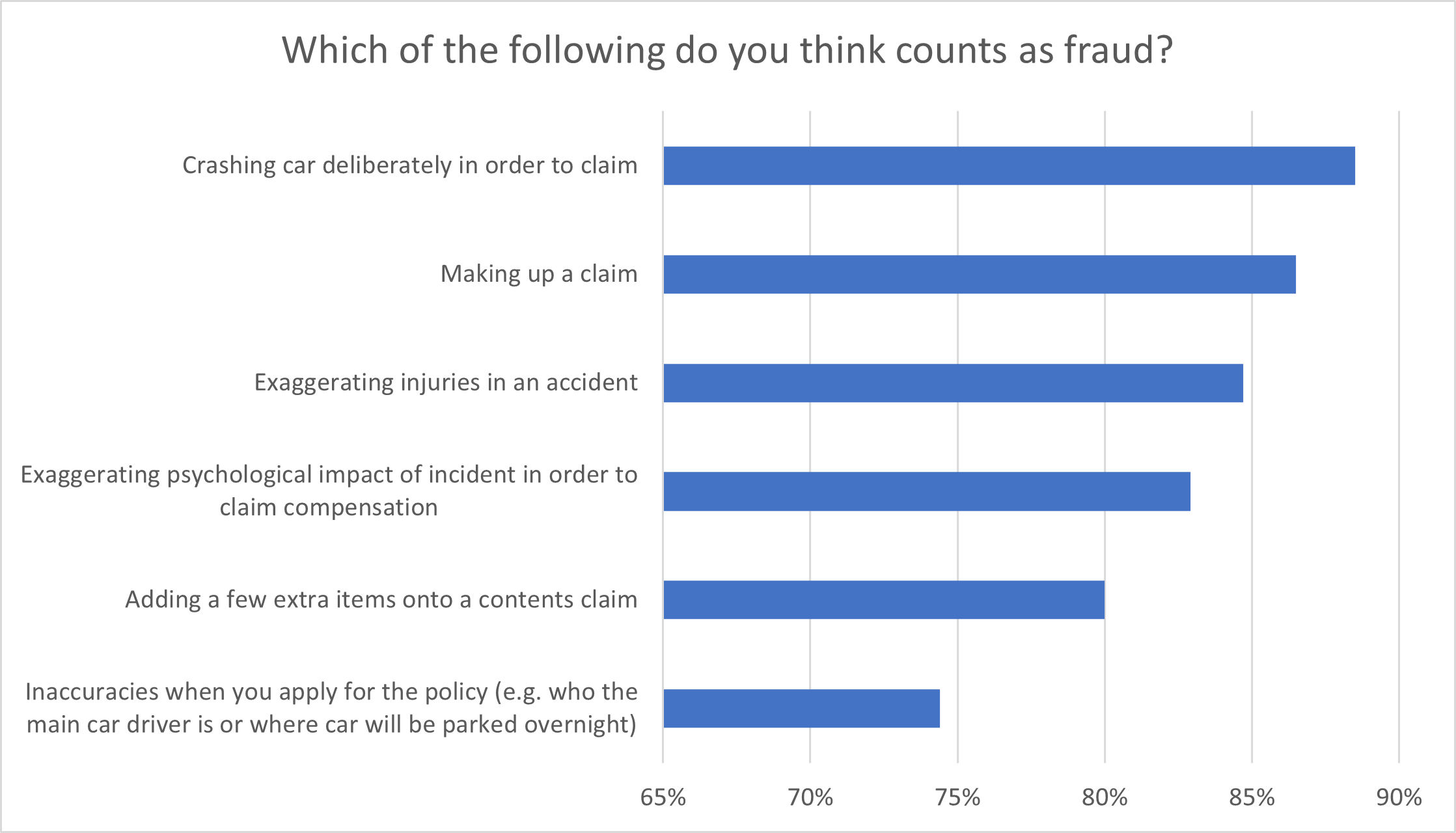 Looking at the reasons why people have or might inflate claims in the future, it looks like there it least growing understanding that fraud is not a victimless crime.

When we asked the 166 people who admitted that they would exaggerate or make up a claim for their reasoning, only 10% cited that they thought it wasn’t really hurting anyone, down from 18% last year.

The rising reasons are those who were persuaded into inflating a claim by a Claims Management Company – from 10% to 13%, those who just needed the money – rising from 19% to 22%, and those who believe they have had previous claims unjustifiably turned down.

A past bad claims experience or a feeling of entitlement after years of paying in premiums remained top of the list of reasons for claims fraud.

What happens when you commit insurance fraud?

Understanding of the consequences of insurance fraud was found to be low.

Only 31% thought insurance fraud would end in prosecution. 28% thought an investigator might ask some questions, and turn down the claim. And only 7% thought the consequences of fraud might be that they’d have to pay higher premiums to secure coverage in the future.

Meanwhile, 26% did recognise that insurance fraud could lead to higher premiums for everyone.

There is clearly a disconnection between what the insurance industry defines as fraud, and public perception, and a growing desperation amongst people caught in a the cost of living crisis.

This presents an opportunity for providers to talk to customers – not just about fraud and its consequences but about what they can do to help those pushed into financial instability. If we can step in to help newly-vulnerable customers BEFORE they are tempted into fraud, that trust and goodwill we engender could stave off many future issues.

The pet insurance opportunity – and challenge

The pet insurance opportunity – and challenge

The pet insurance market has grown steadily over the last few years, and that growth is only set to accelerate moving in...

Insurtech: Is the Face Of Insurance Aggregation Changing?

Insurtech: Is the Face Of Insurance Aggregation Changing?

Back in 2014 the FCA issued a warning about add on insurance products. With the buyer’s attention on the main product, t...