Cancel culture and the power of the consumer 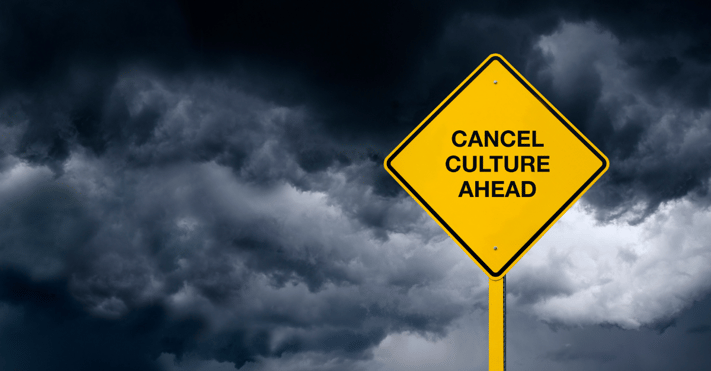 Cancel culture is the term that’s been coined to describe what happens when a person or brand behaves in a way that causes such a wave of public outrage or derision they are effectively ‘cancelled’.

It’s a new name for a much older phenomenon – that of people voting with their feet. And for an industry struggling to recover consumer trust, it’s well worth keeping an eye on.

The latest figures from our Viewsbank survey show that a third of Brits have boycotted a brand or company.

Nearly half of those had done so because of a personal bad experience of the products or services, with another fifth citing the bad experiences of friends or relatives. But there does seem to be a growing trend for people to express their ethical and political views through what and how they buy.

42% of people said they’d boycotted a firm because they disagreed with its business ethics, 38% had boycotted for political reasons, and 30% for environmental reasons.

In the unprompted list of top brands people had boycotted are some of the usual suspects, including Nestle at the top, Tesco, Amazon, Starbucks and Barclays Bank. Some insurance brands were also mentioned on individual occasions.

Political boycotts are nothing new. The latest controversy has centred on the self-styled ‘anti-woke’ TV station GB News.

Launched on 13 June, the Fox News-style channel is the first in the UK to be set up with an explicit political orientation, and has received backlash for both its technical glitches and its coverage.

The new station has attracted the attention of pressure group Stop Funding Hate, who’ve been leading the calls for advertisers to pull their support from the channel and publishing which brands they see.

Several large consumer brands including Vodafone, Ikea, Kopparberg, Grolsch, Nivea, Pinterest, Specsavers and Octopus Energy have all pulled or paused ads on the channel, with some insurance brands also reconsidering their adverts.

The power of the customer

We all know that vocal folk on Twitter may not actually represent the majority, though.

Our own data tells us that while nearly half of Brits are aware of GB News, only 35% have watched it. Those who were aware of it were divided; 22% said they agreed with its politics – while 22% said they disagree and 58% saying they didn’t know enough to comment.

We then asked if consumers might boycott a company who advertised with the channel, and found only 10% said they would boycott GB News advertisers. Nearly half (47%) said they’d need to look into it, leaving 43% saying they wouldn’t boycott advertisers. 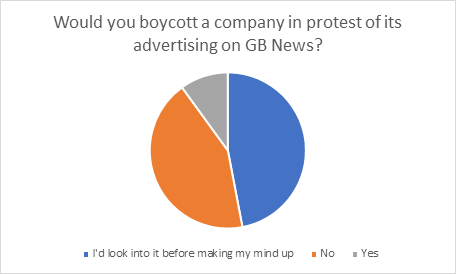 When we asked if people would actually go as far as to write to a company to register their discomfort with GB News advertising (something the Stop Funding Hate campaign is calling on consumers to do) we found the majority (78%) of consumers said no. Nearly a fifth (18%) said they would, with 4% more having already done so or planning to do so soon. 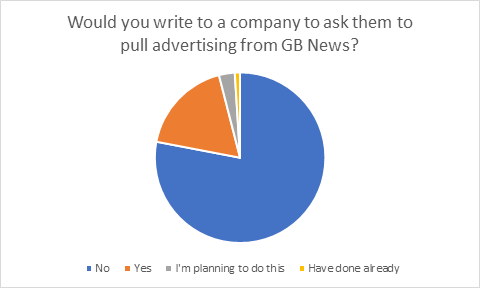 Overall, what’s clear is that most people won’t bother to give brands a written warning before they ‘cancel’ them - but that’s not to say political and ethical considerations might not be a factor in future decision making, and they might end up voting with their feet further down the line.

If there’s a lesson in here for the insurance sector it is that customer opinion matters. Consumers vote with their feet if they are treated badly, but they also have a long memory for bad business ethics.

In a world where insurance firms will be competing less on the basic and base level of price, brand equity is more important than ever. Having an opinion, a culture, and a set of core values is vital. Because things like CSR, environmental impact, and customer commitment may well no longer be either empty rhetoric or tick boxes for regulators, but new post-pricing practices battlefields for customer hearts, minds, loyalty - and spending.