A pet isn’t just for lockdown

Lockdown measures have provided a new perspective on life – especially those that have been able to work from home. Things have become simpler. No more sitting in rush hour traffic, more quality time with the family, and even time to spare. For some, they put this time to use, by introducing a new member to the family in the form of a new pet.


In September, we reported that 1 in 10 had acquired a new pet between March and August of this year. However, since then, murmurings from the industry say there’s been an uptick in customers insuring slightly older kittens and puppies, indicating owners of pets from new litters have thought twice and given them up to be rehomed.

To test this theory, we surveyed new pet owners to see how they’re getting on and whether pet ownership is everything they expected it to be.

54% of respondents said they purchased a kitten or puppy from a fresh litter since we first went into lockdown. Surprisingly, only 1% said they had already given up their pets, but an average of 14% say they are considering doing so.

The highest rate of people giving up on their newly acquired pet are those who rehomed an adult cat, with the most prevalent reason being aggressive behaviour.

However, it is the more gallant group of pet purchasers, who have rehomed a kitten or puppy from a rescue centre, that are the readiest to throw in the towel. 4% have already got rid, but an astonishing 1 in 5 are thinking about it. For rehomed puppy owners, the top reason cited is the cost of looking after them, and rehomed kitten owners say that their pet is wrecking their house or had been aggressive towards children in the house.

Across the board, these are the top two reasons cited, no matter the age or circumstances of how the pet was acquired. 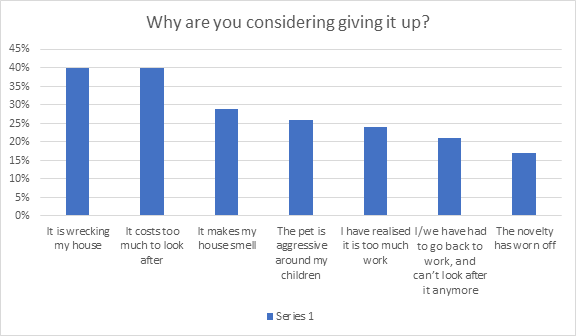 As they say, a pet isn’t just for Christmas. Now we’ve learnt they’re not just for lockdown either.

Understanding how the looming recession, as well as a potential second peak of the pandemic, will impact consumers through the rest of 2020 - and beyond - will be key for insurers.

To follow the changes to come, gain insights into the next stage of the pandemic and examine how they affect consumer behaviour and attitudes, we have launched version 2.0 of the Covid-19 consumer tracker, which is now available to purchase.