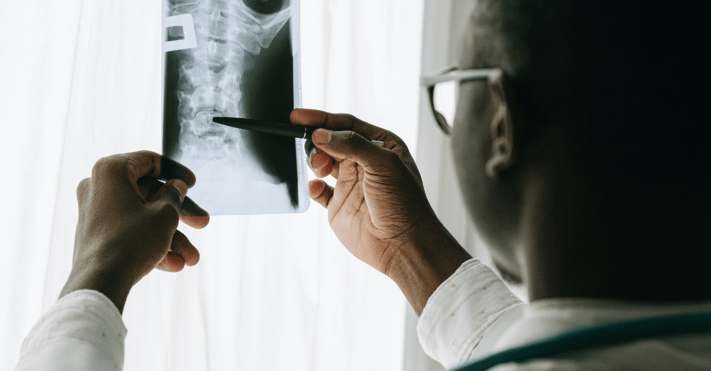 Nearly 9 out of 10 people aren’t aware that claims process for whiplash injuries is soon going to look very different, as the new whiplash portal comes online.

In a recent Viewsbank survey, we found 89% of Brits weren’t aware of the changes, or how they might be affected when it came to making a claim.

From 31 May, the Ministry of Justice’s new whiplash portal will handle all road traffic accidents. It is supposedly designed as a self-serve option for unrepresented claimants with simple claims – although how simple it can be has been called into question after the recent preview of the dense 64 page ‘guide’. And claimants will have to use the portal because the new small claims limit is rising to £5,000, meaning costs will no longer be recoverable for claims below that figure. Damages for pain and suffering will be also limited to £250 for symptoms lasting 3 months or less, rising gradually with the proven severity of the injury.

When questioned, half of responders assumed these changes were all about insurers saving money - versus 31% who thought it might also end up saving consumers money on their premiums in the longer term.

Although only 11% had actually made a whiplash claim in the past, there were fairly strong feelings about it.

As many as 37% thought fixing whiplash payments at around £250 was unfair. The majority backed the lower payments with an even split between those who cited reduced premiums as the main reason for their support and those who detailed a reduction in fraud.

In slightly better news, 77% recognised that whiplash rule changes might be coming in to prevent fraud, and 90% thought it was a good idea to stop whiplash claims that weren’t actually medically diagnosed.

While this might seem like evidence there’s some willingness to accept changes to the whiplash status quo, it’s clear there’s a huge job to be done to communicate those changes well, and avoid potential disillusion at the point of claim – and potential difficulty in claims call centres.

It’s also clear that insurance companies definition of fraud, and the public’s, do not always align.

It’s very difficult to get an accurate view of fraud from the public, who out of a sense of self-preservation or run-of-the-mill cognitive dissonance won’t admit openly to committing fraud, or won’t necessarily see their actions in this light. Nevertheless, 3% of people told us they had totally made up a claim or exaggerated it, and a further 8% were prepared to say they hadn’t done so, but probably would.

Only 77% said they felt any exaggeration on a claim was ‘fraud’, with 17% saying it depended on the circumstances or the claim, and 3% saying it was acceptable as long as it was done on a small scale.

Around 20% didn’t think adding extra items on a contents claim or exaggerating their value counted as insurance fraud, 14% seemed to think it was okay to exaggerate injuries in a car accident, and 18% thought it was fine to exaggerate the psychological impact. A quarter of respondents were okay with lying on the application for a policy – for instance about where a car was parked overnight.

Crashing a car deliberately in order to make a claim was only recognised as insurance fraud by 90% of respondents! 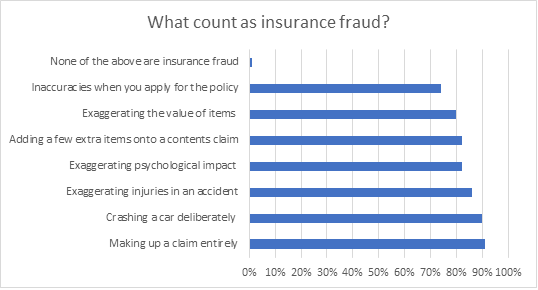 For those who admitted exaggerations, or a willingness to exaggerate, 37% said they inflated or would inflate claims because ‘insurers always barter down anyway’. 27% said they would because they’d had premiums for years and never claimed, and so were ‘owed’, and 23% said they thought insurers deserve it and can afford it. Other excuses included 19% who needed the money, 18% who thought it wasn’t really hurting anyone, 16% ‘because everyone else is doing it’, and 14% because they thought they’d had claims unfairly rejected in the past. 10% had been persuaded into inflating claims by a claims management company.

In good news, only 3% of people from our survey had been actively unhappy with how past claims had panned out for them. 68% of those who’d made a claim were happy, leaving 29% with mixed experiences – and perhaps a heightened inclination to at least ‘go in hard’ the next time around.

There’s lots in here for insurance brands to unpick, but it’s easy to see the public and industry are not always on the same page when it comes to what constitutes fraud and what claimants may expect after being involved in an accident.

Communicating fair value throughout the customer journey – including through the claims process and including around whiplash reforms – is key in managing expectations, and by doing so managing customer experience, and retaining customer loyalty.

Offers and incentives on the rise