deeper dive into our insight for clients only

A festive message from our CEO

Which insurers are turbo charging the...

Multi-brand strategy pays off for Adm...

Fair’s fair. Or is it? Premium finance in the eye of the beholder

The FCA has made it abundantly clear that premium finance is integral to Fair Value.


In the latest General insurance pricing practices market study - the consultation period for which closes in January - Fair Value is mentioned 102 times. Retail Premium Finance is mentioned 96 times, often in the same sentence.

It is not enough to make your core products fair – for instance by ending price walking for existing customers. ‘Fair’ must extend to every corner of your offer - particularly those dark corners where the FCA suspects unfairness might just be lurking.

However, there are significant outliers.

Fair’s fair, and it’s probably clear that that’s NOT fair.

But the real trouble is that when it comes down to it, fair is actually in the eye of the beholder. What seems fair to the insurer might not FEEL fair to the customer…

So what DO your customers think is fair when it comes to credit? 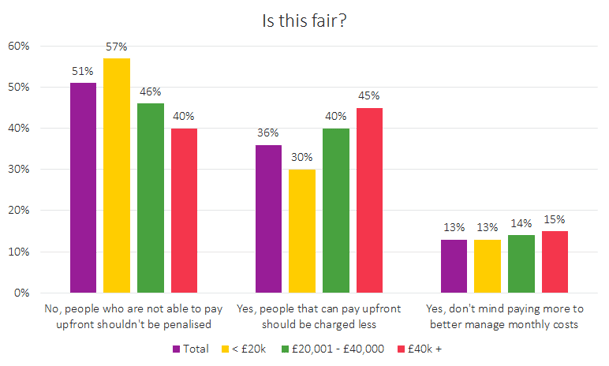 It was a pretty even divide.

All in all very slightly over half (51%) thought no, it wasn’t fair to be penalised for paying monthly, with the other half thinking it was fair enough – either because they didn’t mind spending more to be able to better manage monthly costs, or because they felt paying up front was better for the insurer and therefore it made sense for those people to be charged less.

But digging down, attitudes are very clearly affected by individual circumstances – including income and age.

Those earning less than £20K were more likely to think the rise unfair, rising to 57%, and those aged 35-54, rising slightly to 54%. These groups are the people most likely to struggle with paying a large sum up front, and with the most financial obligations to juggle.

So fairness definitely IS in the eye of the beholder.

But exactly how much are they beholding as fair? 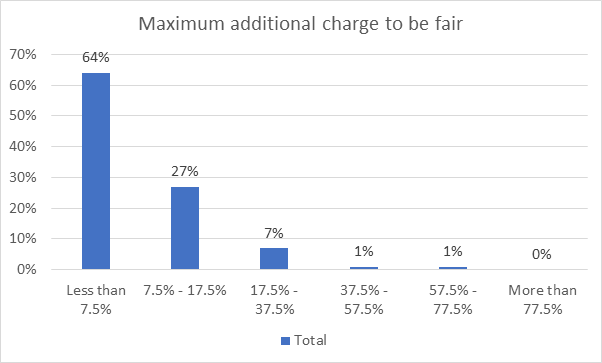 Unsurprisingly, when asked how much additional charge was ‘fair’, most people thought the cheaper the better/fairer, with 64% wanting to pay less than 7.5%. More than a quarter, though, 27%, were happy to pay between 7.5% and 17.5% - which is the range in which the average cost of credit (13%) actually falls into.

Notably, paying above 17.5% was widely seen to be UNfair.

Deposits were another area of premium finance where insurers could be falling foul of consumer perceptions of fairness.

The higher the up front deposit, the lower the monthly cost for the course of the policy, and in their current financial position most consumers, 65%, would prefer to pay a bigger deposit and less per month.

A leap of fair faith

So where does all of this premium finance fairness awareness actually leave insurance brands?

The brands that were racing to the bottom of the barrel on policy price were often making that up in retail premium finance – and that’s clearly not going to cut it when each product has to be assessed independently. Changing that outlook and that strategy is going to be a leap of faith.

The good news is that Fair doesn’t actually equate to Cheaper, for either the regulator OR the consumer.

Brands get into most trouble with ‘Fair’ when there’s a gap between customer expectation and experience. Very often those communicating effectively about the value of products and services - and being transparent about their pricing practices – will find customers are willing to pay.

Insurance can look to the banking sector for inspiration. When account charges were put up or down based on fairness, and when this was explained clearly to consumers, demand and volumes were seen to go up for those paying more as well as those now paying less.

Sometimes you don’t need to throw your product out with the bathwater – you just need to blow away the bubbles and explain why it’s floating.

In terms of communications around premium finance, there is clearly a long way to go.

After setting our scenarios, we asked customers if they’d been aware beforehand that paying monthly would cost them more than paying their whole premium at once. A quarter of them didn’t know instalments were more expensive. That rose to 40% of less experienced drivers under the age of 34.

Fairness IS in the eye of the beholder, but insurance brands have the opportunity to change their customers’ view.

Communicating value and fairness, building a new relationship with customers, and courting loyalty, will all be key in the brave new Fair Value insurance world.

Want to catch up on what you missed?

To watch the whole webinar on retail premium finance, and access the presentation slides, click the button below.

All change in contents-only insurance landscape