One year on from renewal price disclosures: has anything changed?

It’s been a year since the FCA required personal lines brands to display the previous year’s premium on renewal notices together with a message encouraging customers to shop around. The regulator hoped that drawing consumers’ attention to what happens to their premiums at renewal would promote competition and ultimately help to wean insurance brands off dual pricing, whereby new customers get the best prices and loyal customers pay more.

So 12 months on, has anything changed? The answer is “only a bit”.

Consumer Intelligence’s Insurance Behaviour Tracker, which monitors the insurance buying journey of over 40,000 home and motor customers each year, shows a modest uptick in the number of consumers who shop around at renewal. The number of motor consumers who shopped around at renewal increased by 1% to 85.1% for renewals after the FCA’s rules took effect on 1 April 2017. For homeowners, the rise was a steeper 3% to 77.6%

Encouragingly for the FCA, this includes customers who had been with their previous insurer for a longer period. This group, which the regulator particularly thought needed an extra prompt, still shopped around far less than average, but they moved in the right direction. This was especially pronounced in motor with 70.6% of customers who had been with their insurer for four years or over shopping around after 1 April, compared to 66.9% before the disclosure requirements.

The incumbents are doing a good job of fighting back and hanging onto the customers who do shop around. The proportion of those motorists who shopped around but ended up staying put increased by 1.2%  and for home policies the number who stayed with their previous insurer after shopping around increased by 0.4%. In both cases, a slightly higher proportion of those who stayed reported that they had been offered a better price. Indeed, offering a better price to customers who went to the effort to shop around helped 46% of motor brands to hold onto customers they were at risk at losing.

In other words, there are better deals for loyal customers — they just have to threaten to walk first.

But the savings made by those who did switch indicates that on the whole, firms are still increasing prices at renewal and continue to charge most to their most loyal customers. The graphs below show just how similar the savings made from switching have been compared to before the disclosure requirement. 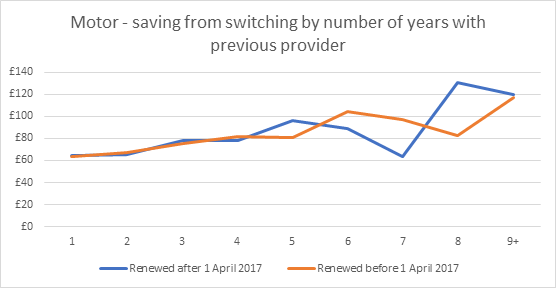 Some brands have been quite vocal about the need to fix a market which charges more to loyal customers (however much you internally describe the low premiums for new customers as an ‘introductory discount’).  But there is little evidence of a radical shift. Of the  motor brands we tracked, customers of 85% of them were more likely to see an increase in premium than the previous year at renewal. On average, 61% of consumers were quoted a higher home premium at renewal, and 21% a lower premium.

This isn’t a surprise. The policy landed at a difficult time for insurers. The reduction to the Ogden rate discount and increased home claims costs have meant that both lines have seen premiums for new business rise too, so it’s little wonder the trend has continued to be for prices to rise at renewal too.

Brands may have faced 1 April 2017 with good intentions, but the shock of the Ogden announcement was a far bigger issue. Insurers needed to make sure they sustained their income. Fixing an introductory discount or rolling it over for renewing customers would have been a huge risk: charge less at renewal and lose margin — charge more in the first place and lose volume. 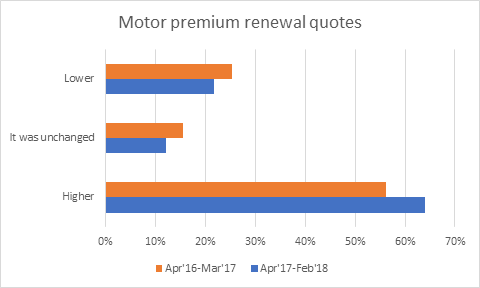 The FCA has made it clear that it is keeping a close eye on whether firms are adequately displaying the previous year’s price at renewal. It vocally marked the first anniversary of the new rules by rebuking RAC for failing to do so for its breakdown cover, forcing the firm to write to a million customers.

If its warnings continue to prompt increased shopping, the dual pricing problem might just follow slowly behind. In the meantime, consumers are better informed than ever.

What if you could improve your retention whilst also complying with FCA guidelines and improve your customer engagement at the same time?

With motor insurance premiums set to rise further, and a reminder of this in renewal notices when changes come into forc...

This week marks yet another enforced change on the general insurance industry. From the 1st of April brands must publish...

It’s appropriate to ask the question, what factors influence a customer’s decision to switch or renew? Price is a signif...