The ransomware blackout at foreign exchange firm Travelex has affected thousands of customers ordering holiday money online from a number of brands.

Exclusive research from Consumer Intelligence shows that around a quarter of people ordering currency have experienced delays, with many left out of pocket. Some are planning to shun affected brands, but the Consumer Intelligence research shows there is general confusion over which brands are affected, and how the companies should respond.

“We know that customers are not brand loyal when it comes to foreign exchange, so anything that makes a transaction inconvenient is likely to persuade them to move elsewhere,” says Jade Edwards, Head of Banking at Consumer Intelligence.

“The Travelex issue has been widespread and affected brands should be ramping up their communication and considering how they apologise to affected customers and perhaps offer compensation.”

The scale of Travelex’s troubles

Travelex took down its website on New Year’s Eve 2019 after experiencing a serious cyber attack. The move did not affect just the firm’s own bureaux de changes, but those offered by banks and other providers who use the firm to supply foreign currency.

Cashiers resorted to using pen and paper and continued offering travel money at bureaux de changes in airports and on high streets but online orders were suspended, and still were not operational in early February. At the time of writing, several had not yet been restored.

Consumer Intelligence asked over 1000 respondents in mid February whether they had experienced delays in receiving currency. Three quarters of respondents said no, but a quarter had had orders delayed and nearly one in ten respondents were still waiting for the issue to be sorted.

Some respondents reported being seriously out of pocket, and of those who had lost cash, nearly 70 per cent were out of pocket by more than £200.

Customers who recently ordered foreign currency had ordered money from a number of affected brands, including Tesco Bank, Sainsburys and Barclays. The Post Office, which had been used by the largest percentage of respondents (11 per cent) was not affected by the Travelex issue.

Most customers said they had chosen the brand due to good rates and prices or due to convenience, but other reasons for a choice included trust in the brand, while 22 per cent said that the online service was the reason for the choice.

“Increasing numbers of people are turning online for their currency,” says Jade Edwards

“We know that younger people are increasingly using apps for their currency buying while older people use websites. Any disruption to the online offering is likely to put them off using a brand again.”

Why did you choose the brand you did to order foreign currency? 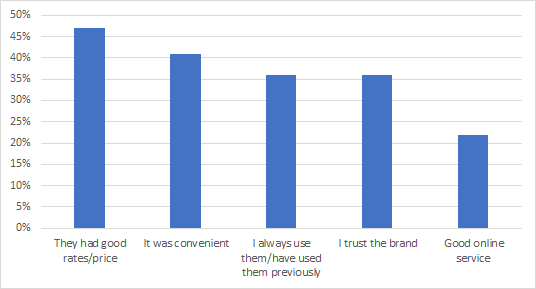 Awareness of the problem

However, when asked to name the brands affected, most did not know many of them named brands that had not been hit by the Travelex attack, indicating that the issue may affect trust in the whole industry. While the top brand named was Tesco Bank, which was affected, the second most cited name was the Post Office, which was not.

Can you name the brands affected by the Travelex problem? 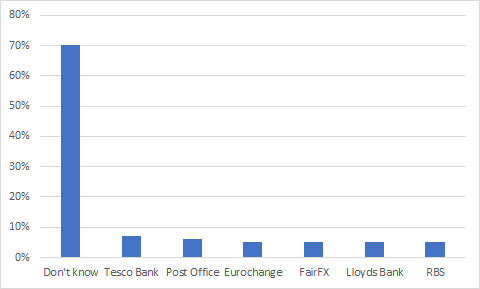 Despite evidence that most customers do not know which brands were affected, large numbers said they would not want to use an affected brand, with 30 per cent saying that they would be less likely to use these brands than they would have been previously.

What companies can do about it

Consumers suggested a number of measures that would help to restore trust after the Travelex debacle. These included compensation for customers affected, apologising, and changing suppliers away from Travelex.

What could the brand/s do to convince you to purchase from them in future?

“Travelex’s problems have pervaded the public consciousness, but without much understanding of the issues behind them or who has been affected,” says Jade Edwards.

“Brands should be asking themselves whether their reputation has been affected -even if the service has not been - and whether customers or potential customers considering your brand will have been influenced.

“Even brands unaffected by this issue directly should seek out deeper insight from customers so they can best position themselves to be the trusted party going forwards - particularly in the vital summer season.”

With more of us than ever enjoying global lifestyles and sending and receiving money in more than one currency, innovati...

Government ministers might have ruled out Brexit as a factor in the travel firm’s demise, but industry experts point to ...

What will coronavirus do to the pound?

What will coronavirus do to the pound?

Political and economic events always impact on currency rates, but what will coronavirus do to the pound?