Now Consumer Intelligence is urging FX companies to consider moving away from offering indicative rates to customers going through the money transfer journey, and replacing these with guaranteed rate systems so customers get the rate they expect.

Too many consumers are being offered these indicative rates, while companies are also only updating their market rates periodically, so that the rate customers get does not always relate to the market rate, especially in times of volatility.

“We know that price and transparency are important to consumers,” says Jade Edwards, head of banking at Consumer Intelligence.

“However, many FX providers still rely on outdated systems that do not update market rates on a timely basis. Customers don’t know what margin they are getting, and are often relying on indicative rates when they buy.

“This archaic system is particularly unjust in times of high volatility, such as the coronavirus crisis, when rates move very quickly. Customers may not have received accurate prices, and companies risk negative perceptions and PR when it comes to their foreign exchange offering."

Many large UK FX providers use what Consumer Intelligence calls ‘SHEET’ rates  - updated daily, or on an ad hoc basis. Others, however use what are called “GET rates’, updated at intervals of ten minutes or less.

Using SHEET rates results in fluctuating margins, as the graph below shows (brands C, D & E), and this is particularly exacerbated in times of volatility such as the recent crisis.

“If a consumer compared a SHEET rate or calculated margin against the market rate or another company to see if it was a good deal their comparison would be affected,” says Jade Edwards.

“A consumer can be misled into thinking FX rate/margin is better than it actually is, especially so when rates are only indicative which is a common market practice. This could, in turn, lead to negative PR when the rate is found to be less good.”

More move to GET

“We have seen increasing numbers of FX providers moving to GET rates recently, and are able to apply proprietary techniques to ensure that our benchmarking takes SHEET versus GET rates into account.

“However, it is not so easy for customers to compare. In this day and age SHEET rates should be seen as archaic form of cost representation for consumers.”

Consumer Intelligence’s studies reveal that rate and transparency are important to customers who are sending money overseas. Getting the best rates was rated as the second-highest priority by a survey of these customers,  only behind trusting that money that is being sent is secure, while knowing the exact amount of money that will be sent and received was the next highest priority. Both these things were listed as more important than speed and ease of use for customers.

“It’s increasingly important to move to these tech-led solutions to retain customer loyalty,” says Jade Edwards. “Coronavirus merely highlights how important it is that customers can trust the information they are getting.” 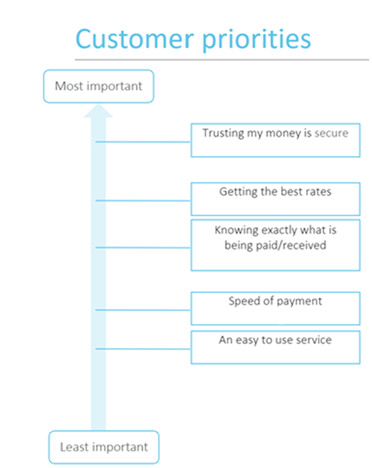 A UK bank was experiencing a continuous decline across its FX and wealth portfolio and wanted to gain an understanding of what economic, consumer and market forces were driving this decline and secondly what steps could the bank implement to deliver turn the tide and deliver a world class service.

Working with the bank’s pricing team, Consumer Intelligence presented a key change into how its existing pricing structure was implemented. Specifically, a motion was proposed and enacted to move to a multi-tiered rate configuration, whilst simultaneously significantly reducing transaction fees. The result of these actions was to align the bank’s pricing with market leaders.

In the past five years, the world of payments has changed beyond recognition. Where banks once monopolized the cross bor...

Changing people’s foreign exchange buying habits is not easy. We know from our research that customers value convenience...