Telematics offerings have long been positioned competitively for younger drivers, with 59% of the five cheapest quotes for drivers under the age of 25 coming from telematics firms. But the latest research from acclaimed insurance data insights business Consumer Intelligence shows that 20% of the five cheapest quotes for drivers aged 25-49 now come from telematics firms – the highest figure recorded for this age group since the firm first started collecting data in October 2013.

Furthermore, an uptick has also occurred for the over 50s, with telematics products now accounting for 8% of the 5 cheapest quotes returned for this age group. 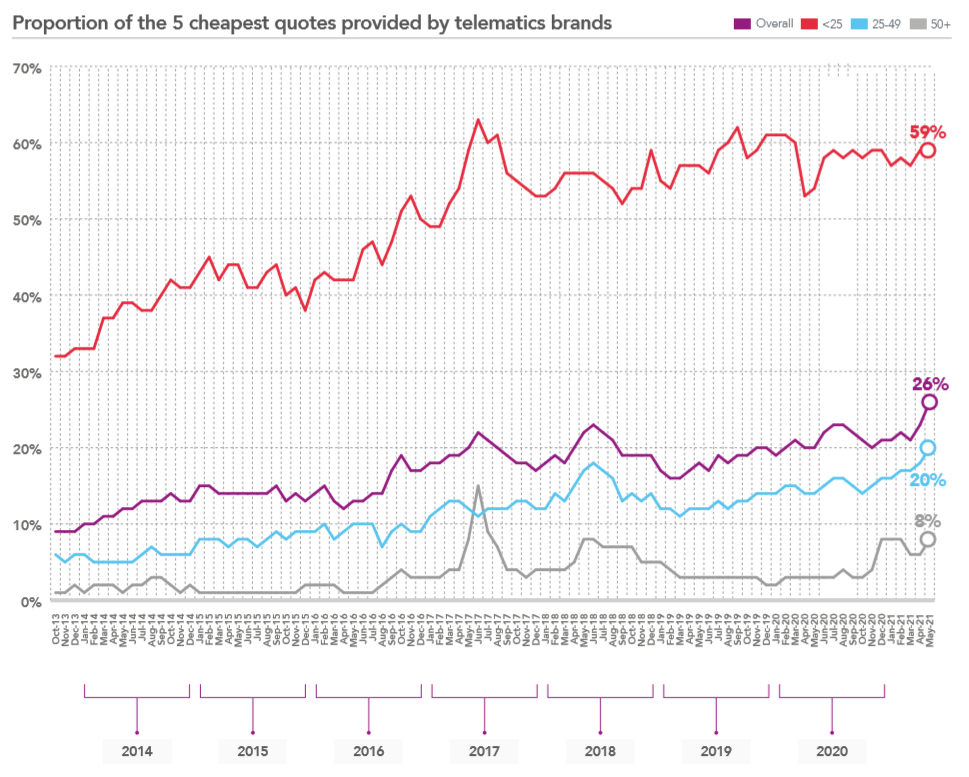 This insight comes from the latest Consumer Intelligence Car Insurance Price Index, which reveals car insurance premiums have plummeted 8.4% in the last 12 months, with the average policy costing £779. But the increase in telematics products appearing in the top 5 results on price comparison websites (PCWs) isn’t the only downward driving force in the market.

Harriet Devonald, product manager at Consumer Intelligence, says: “We are seeing a downward trend for premiums across the board – in all of our age and regional segments – and it’s not just the uptick in telematics quotes behind the plummeting premiums. With the FCA’s pricing remedies coming in at the end of the year, some brands are looking to gain volume while they can. Others, who benefited from a quiet year of motor claims in 2020, have been able to pass savings onto customers, whilst other brands are following the market downward in order to remain competitive.

“It’s unlikely that this trajectory will continue as we move through the second half of the year. Once the new regulation takes force, we are likely to see a hardening market once more.”

Although prices have now fallen 18.2% from their September 2017 pricing peak – and they are now at levels last seen in 2016.

The cost of car insurance has decreased broadly in unison across all our age groups.

Scottish drivers (1.5%) were the only motorists in the UK to see their premiums increase in the last three months. Whereas drivers in the Northwest (-3.2%) and Yorkshire and Humber (-3.1%) saw significant falls.

Londoners (£1,456) continue to be the most expensive drivers to insure, with the North West (£994) following in second – a fair distance behind.

At the other end of the scale, the South West (£517) is now the cheapest UK region for car insurance, followed closely by Scotland (£524) and the East Midlands (£532).

[1] The cheapest premiums were calculated by comparing the prices offered for 3,600 people by all the major Price Comparison Sites and key direct insurers. The top 5 prices for each person were compared to the previous month’s top 5, then these variations averaged to produce the index.