Are We Underestimating Underinsurance?

A recent report from the ABI, using research from Consumer Intelligence, revealed that one in four households has no contents cover. With an average £35,000 of contents per household, this equates to an insurance shortfall exceeding a quarter of a trillion pounds.

Further analysis suggests that even for those who do have insurance, there is a risk of inadequate cover as policyholders who underestimate the value of their possessions don’t understand the impact that has on all potential claims because of average clauses.

The good news is that overall levels of knowledge about home insurance are high. Some 90% of consumers believe they fully understand the product and the majority correctly identify the perils covered by their policies.

“When customers do engage they are not always as fazed as they might initially think,” says Stuart Peters, our Head of Consumer Research.

But underinsurance is the exception. Three in four people claimed to understand it, but only a third grasped the effect it could have on a claim.

We posed a hypothetical situation of having £50k of insurance goods but only £25k of contents insurance. Because of the average clause (standard in the majority of home policies) any claim could be halved, because the policyholder only insured half their possessions.

But a third of people who think they understand insurance didn’t actually understand this. Over half of them thought they would receive a full payout for a £25k claim.

This creates a gap in expectations as well as coverage.

You have £25,000 of contents insurance, but your insurer thinks you have £50,000 of insurable value. Would this make any difference if you claim? 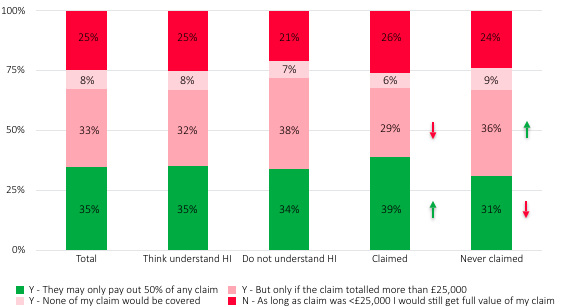 Unsurprisingly, experience appears to be the best teacher. Across both buildings and contents insurance, our research found differences for those who had claimed; 39% of this group understood the impact of being underinsured, compared to 31% of consumers who have never claimed.

Getting the right cover

Compounding the problem, most policyholders are just guessing how much cover they need rather than using tools provided by their insurer or professional adviser.

Again, those who have experienced making a claim are more clued up and therefore more likely to use something better than a back of an envelope estimation of their contents and buildings insurance. Only 25% of people who have made a claim use guesswork for buildings insurance, compared with 34% who haven’t claimed.

“Calculating cover is a bit mysterious to consumers, and so most estimate their cover amount without going into too much detail, or seeking third party advice,” Peters says.

“Those who aren’t confident that they understand their policy spend the least time on choosing, buying and renewing their policy, the assumption being that they continue to ‘hope for the best’ once it is bought.”

How people calculate their cover

This isn’t a case of deliberately underestimating to reduce premiums. Many people overestimate to be cautious too.

It is also a question of clarity and convenience.

A clutch of insurtechs including Trov, Buzzvault and C-Bien are trying to build in accurate contents estimations by encouraging users to securely catalogue (and update) their possessions in a digital vault, typically using their mobile phone. Companies with detailed understanding of the consumer and their purchasing habits, such as Google or Amazon, are also well placed to develop solutions in this space.

Existing players, too, are live to the issue, including those who specialise in serving high net worth individuals. Some brands also stop quoting when the customer requirement exceeds standard or ‘blanket’ forms of cover, which is more typical for buildings insurance.

Other insurances, including telematics, also offer a blueprint for success. Smart technology and detection technology in the home will help drive claims ratios lower. The most impactful technology, however, could be video.

Buzzvault, which will launch a UK home insurance product this summer, claims video surveys are more accurate, and could potentially remove the problem of underinsurance.

Ultimately, the issue has much in common with other industry challenges: products that are intuitive, seamless, and provide both insurers with better data and consumers with more compelling options to engage — while giving themselves greater peace of mind — are the future. Consequently, underinsurance may well become a thing of the past.

“Consumers do not need more information,” says Peters. “They need it to be more accessible, more engaging, and benefit from dialogue with the provider which transforms the transaction into a relationship. Those at both ends of this relationship will reap the rewards.”

At Consumer Intelligence we believe that it is the businesses that adopt an unwavering focus on their customers who will survive and grow.

We make it our mission to help you achieve this by providing tools and services to enable you to better understand consumers’ attitudes and behaviours, as well as the means to analyse this data and take positive business decisions as a result.

Download our guide to 'Understanding Consumer Attitudes' to learn how our output goes beyond research and data to uncover genuinely exciting insights – invaluable nuggets that can help transform your business and your bottom line.

Are Motor Brokers Getting A Fair Deal From Their Insurer Partners?