It is the beginning of a new decade and with it comes a lot of pressure for the industry to make substantive change. The key question is what will that change look like? And how will it manifest?

There are 5 areas where we see the tectonic pressure on the industry needing to be relieved either through change the incumbents make for themselves or through an earthquake caused by others.

These are the 5 core tectonic trends that we think will drive change in 2020:

Each of these on their own will create substantial change, but when combined they set a very interesting foundation for the rest of the decade.

The year of the roll-out

Much of the last decade was spent with larger companies having technological indigestion. At the beginning of the decade green screens still blinked away behind much of the legacy IT architecture of the insurance industry. That was not only archaic and inefficient but was also not fit for purpose for a modern industry or to face the challenges of the future. New upstarts were able to use technology as a weapon to move faster and adapt in a more agile way to the changing market.

Deciding to change was easy, implementing the change was horrific and expensive. We have heard reports that some of these systems are over 300% over budget and years late.  But now they are beginning to work and the cost reductions and working flexibility that they are supposed to bring can finally be manifested.

You don’t need to take my word for it.  Take the words of Penny James at Direct Line, one of the new wave of CEOs that entered the industry in 2019:

“We are starting to conclude a phase of high capital expenditure aimed at bringing our technology to the forefront of the industry. We are in the process of rolling out much of this technology now, and while there remains more to do, we are pleased with the progress so far. We expect capital expenditure to begin to decline from its peak in 2019 and for all our major IT platforms to be substantially rolled out by the end of 2021.

“Assisted by the technology change, we will transform our business by working in a faster and nimbler way to deliver the potential of the group. This includes improving our cost efficiency, enabling faster and more accurate pricing and continuing to improve customer experience. All this aims to strengthen margins on the business we write and increase our competitiveness to deliver growth.”

Penny isn’t alone. Across the industry the tectonic plate of change is shifting. Whether it be apps (Hastings reports that 38% of policy amends are now made digitally) or Chatbots (like those at the AA in Ireland or Zurich’s ZARA), there is a huge amount of change.

To see how this shift will affect the industry you just need to pull two pieces out of James’ quote.  “Transform our business by working faster and nimbler” and “Strengthen our margins”. My view is she isn’t talking about technology transformation (that was the scourge of the last decade), she is talking about culture change.  Speaking as a CEO I can tell you that culture change is the most difficult form of change.

It was 1996 when Peppers and Rogers published their book “The One to One future” which talked about treating consumers as a market of one, not treating them as a large herd of cattle to be prodded for the benefit of businesses.

With insurers this has been difficult; the imprecision of data and the difficulty of understanding the exact risk a customer represents has meant a broad approach to risk. Over the last few years we have seen the growth of the usage-based insurer. This started with telematics and in some of the SME insurance spaces, but now we are seeing it roll out more widely across UK Personal Lines.

When Richard King launched Ticker in 2019, he said “There aren’t many underwriters or insurers converting at [the van insurance] level, because they don’t have an appetite for it. That’s an appetite we do have.”

Interestingly, the approach of “make a profit at all costs as fast as possible” seems to have been replaced with a capital market that is happy to take a longer term view on investment as long as value is being built.

Two become one (prices that is)

This is the most obvious prediction for 2020; the industry will need to be seen to do something about dual pricing. What it does is another issue, but the FCA has already signposted that something must be done. The loyalty penalty must be removed, especially for vulnerable customers.

From our perspective we are already seeing those changes start to happen. Late last year we did analysis looking at the rate of change in new business premium and the rate of change of renewal premiums. While they aren’t truly aligned, what you can see is a trend towards alignment in motor insurance. 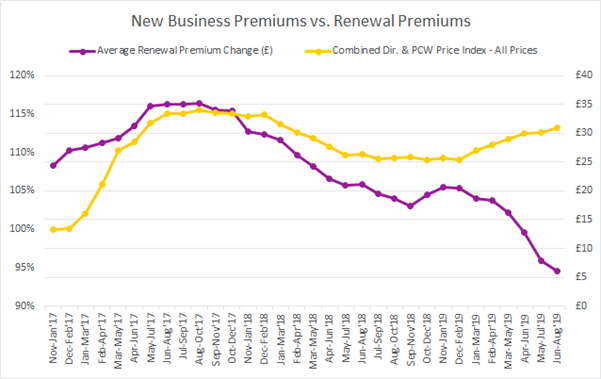 What happens in this space has the opportunity/challenge of radically reshaping the industry and creating winners and losers. In the words of Mohammad Khan, UK general insurance leader at PWC, the FCA was clearly willing to take the risk. He said:

Doing nothing is a risk for the FCA, doing something is a risk for the FCA, there is no “no risk” scenario. Given that this is the year of the roll-out it must be hoped that whatever the FCA asks the industry to do is technically possible. However, there is a lack of precision already creeping into the language the FCA is using and some diametrically opposed issues that it must deal with. For instance, the FCA wants to protect vulnerable customers but has yet to give a definition of vulnerable that is precise enough for companies to be able to use. In the case of credit risk, a more vulnerable customer is likely to be riskier and so more expensive. Better pricing is likely to exclude vulnerable customers. Some of these things just don’t stack up. It seems pretty clear that the first iteration of dual pricing is almost certainly going to have follow the Sheryl Sandberg maxim of “done is better than perfect” and accept Voltaire’s words “Perfect is the enemy of good.”

Whatever the FCA does we just have to hope that they get it done.

Late in 2019 the FCA started to apply the Senior Managers and Conduct Regime rules to the insurance industry.

To quote Jonathan Davidson, the Executive Director of Supervision – Retail and Authorisations at the FCA,

“SMCR is very simple but its effects are radical, they’re going to shift the culture of financial services. I think there are two main outcomes that I’m seeking to achieve from this. One is that every individual in financial services that interacts with a customer, does work that could affect customer outcomes really holds themselves to a standard for their behaviour which is not just tick boxing of ‘I’m complying with some process’ or something else, they’re actually saying ‘There is a standard here of my behaviour and my skills and my due diligence that I need to reach.’ So that’s one outcome. A second outcome I think is that leaders say: ‘I’m not just accountable and take responsibility for my own actions, I’ll take responsibility for leading’”.

Over the years things such as PPI have shown that there are areas where it is possible to make profit at the expense of customers. Preying on their ignorance. The change in rules puts the responsibility on individuals and the consequence of failure is career limitation.

The first place that we are seeing this have an impact is with Non-Executive Directors, they still carry much of the responsibility of compliance but do not have the hands-on capability to drive culture change. The tension between NEDs and the executive team is only set to rise across the course of the coming years. This is already driving some change but as these spread down the business, this can only change more.

Our banking customers are already experiencing this and one of them pointed out recently that insurers really don’t know what has hit them, yet.

My 15-year-old niece in Hamburg takes every Friday off school in order to protest about the climate emergency. Her point is that there is little point in going to school because the planet is going to be killed off before she has a chance to do anything with the lessons she has learned.

No matter what your ethical position is about the cause of the warming of the planet, there is an increasingly vocal (and valuable) consumer/employee base that want to know what your position is on this subject.

You have to ask, is it enough to be carbon neutral? Is it too easy to buy some carbon credits, stick them in a drawer and forget about it? It is essential to think about how you can be Planet Positive i.e. make what you do have a positive long-term impact for the planet.

So far “green” and insurance haven’t really met, but this could well be the year, starting with the terrible fires in Australia, that the environment takes matters into its own hands and forces itself onto the radar. Learning how to be profitably Planet Positive, now, before it is forced on you by customers, employees or politicians (or investors), could be the best way to secure a strong business (and world) for the future.

2020 is not a year where we talk about change, it is a year where change happens, whether that change is forced on us or driven by us. Being conscious of tectonic plates in action will allow us to be the change we want to see, not beholden to it.

We provide our clients with access to a uniquely comprehensive range of data and insights on insurance and general finance customers and markets.