Banks should work on the security and features of their banking apps to increase customer use and loyalty, exclusive Consumer Intelligence figures show.

Our surveys reveal that, although over three quarters of us have at least one banking app on our phone, there are certain transactions that we still shy away from, with concerns about security being the most likely reason.

“We know that banking by app is increasingly popular, particularly with younger people,” says Jade Edwards, Head of Banking at Consumer Intelligence.

“However, customers are more likely to use apps to send money to friends and less likely to pay organisations. With more than one in ten saying that better security would encourage app use, banks should ensure they are giving their customers peace of mind.”

Consumer Intelligence’s Payments Survey revealed that although 38 per cent of us would use a banking app to send money to a friend, we are less likely to use it to send money to an organisation, with just over a quarter (28 per cent) using apps for this. This may be because payments to organisations frequently involve larger sums of money than payments to friends. The survey showed that we are more likely to fire up our computers and use a website, rather than an app, when paying organisations.

A separate study of over 1000 respondents undertaken this month by Consumer Intelligence reveals that although the bulk of those who do use banking apps are comfortable with using their app to check their balance, fewer use it for other things.

What do you use your banking apps for? (app users only)

“Balance enquiries are seen as routine, but banks still have some convincing to do if they want their customers to use the app for other things,” says Jade Edwards.

“Our study shows that the Monzo generation is comfortable with multiple bank accounts and solutions in a way that’s different to those who went before them,” says Jade. “They are less loyal to one bank, and will instead use the technology and systems that appeal to them most."

How many banking apps do you currently have on your phone? 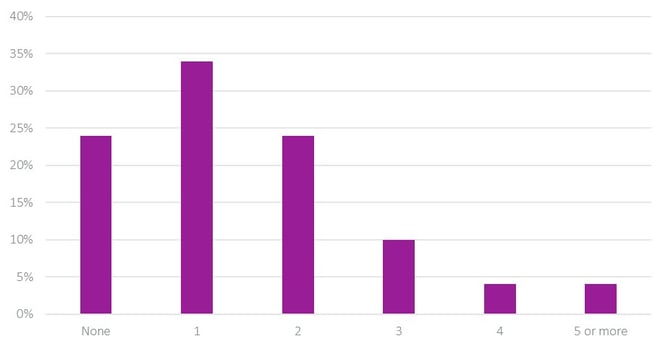 Over a third of us check our banking apps every day, while the most common thing to do is to use the apps a few times a week. Only six per cent use the apps monthly - suggesting that we are all far more aware of our balance and the other features of our bank accounts now that they are so easy to access.

How often do you use your banking apps

Although the vast majority (90 per cent) of respondents said they were happy or ‘very happy’ with their banking app, there was still room for improvement that could increase uptake. 17 per cent said that better security features would encourage them to use the app more, while 16 per cent said they’d be keener to use it if it were easier to use. 14 per cent asked for there to be fewer glitches and problems with the apps.

“Banking apps have been a huge success since launch, with millions of us happy to use our phones to check balances and make payment,” says Jade.

“Our study shows that banks must stay ahead of competitors though, especially when dealing with the younger generation where there is less loyalty and multiple accounts are the norm.”

She said that banking apps could be used for many more purposes, such as making foreign exchange payments, if customers were comfortable with security and fee transparency.

“Working on security and features, as well as ensuring that apps are bug free will help gain customer trust - driving up app use and improving customer satisfaction,” she said.

Consumer research is about people. what they see, what they do, what they buy. Find out how it can transform your business.

We believe that organisations that adopt an unwavering focus on their customers are the ones which will survive and flourish.

Research allows you to hear first-hand from those customers what they think, need and do. Beyond the ‘what’, we can help you uncover the ‘why’ and the ‘what next’. It opens a dialogue with consumers which ensures you continue to delight those who buy from you, and those who don’t but will in the future – which ultimately determines success, resilience and growth.

Card Surcharge Lives On Despite Ban

Card Surcharge Lives On Despite Ban

Nearly two out five take more than £500 in cash on trips abroad But most major travel insurers won’t cover loss or theft...

How Technology Failures Can Damage Your Brand

How Technology Failures Can Damage Your Brand

Banking technology failure has been top of the agenda recently, and whether it is TSB customers shunning the bank after ...