Last month, an investigation by the Sun revealed that some brands use motorists’ email provider as a criteria for pricing the risk, with hotmail users being quoted at up to £31 more for their policy.

It’s not a secret that brands use a vast range of data points to calculate quotes; nor is it a practice that has avoided controversy in the past, with the use of gender for such purposes being outlawed by the EU in December 2012.

With the media continuing to cry foul, we decided to ask consumers what they think. We tested their awareness of these underlying pricing influences and attitudes towards them. As we showed last summer following the great ‘APR rip off’, the issue is far from clear cut, and starts with a fundamental misconception.

Two factors which insurers do not use to price motor insurance — race and gender — received among the most alarming responses, with 83% of consumers believing that gender is still an active criteria. A third (31%) think that race or ethnicity is a factor. While this number is unsurprisingly low compared to the rest of the sample, it has clearly been inflated since the tabloids focused on the use of the name Mohammed vs. John as a pricing differentiator. We note, however, that less than one in five consumers (18%) were aware of any recent news on the subject.

What consumers think is used to price their motor insurance 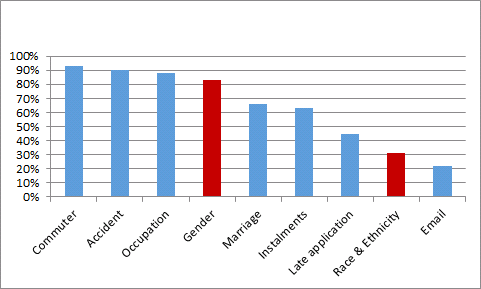 Items in red are not used for pricing

Consumers largely think they understand how their motor risks are priced, with at least 77% of respondents answering either yes or no to each criteria. The greatest uncertainty lay in those who take out a policy just weeks before renewal (23%), and the 22% who said they weren’t sure whether email was used. More than half do not think email is a factor, and it was also considered the most unfair, narrowly ahead of race and ethnicity. The only factor from our rating sample that was deemed fair overall was commuting.

More than half of motorists also believe that the use of marriage, paying by instalment and applying for a quote close to renewal were ‘totally unfair’. By contrast the usual bug bear, being in an accident without being at fault, was considered totally unfair by only 45% of respondents.

Is it fair to use these criteria to price? 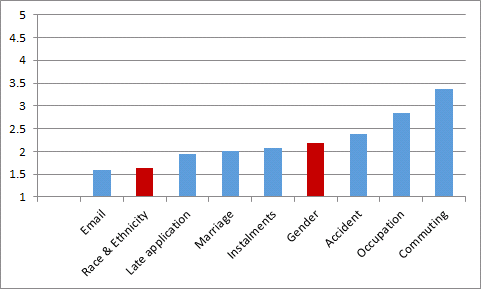 Based on average scores from 1,670 respondents, where 1 = Totally Unfair, 5 = Totally fair

In short, most motorists think they know how the system works. Ultimately, however, many of them do not, while the majority think many of the factors used are not fair.

While the perception of being treated unfairly will be nothing new in terms of how the industry is perceived by consumers, it highlights the challenge it faces. It must try to find a sweetspot between shedding the (equally unfair) image of unethical practice and continuing to use enriched data to price most effectively — the goal of which, ironically, is fairer premiums for all.

We believe that it is the businesses that adopt an unwavering focus on their customers who will survive and grow. We make it our mission to help you achieve this by providing tools and services to enable you to better understand consumers’ attitudes and behaviours, as well as the means to analyse this data and take positive business decisions as a result.

Get in touch to find out how we can help you with bespoke consumer research.

Ogden In Retrospect — A Year Of Motor Rate Volatility