What Insurers Can Learn From Jeremy Corbyn

Something amazing happened during the recent election campaign and insurers would do well to pay attention to it. The industry has a mountain to climb to connect with customers, and Jeremy Corbyn has shown the industry what it needs to do.

During the recent general election, Consumer Intelligence monitored the mood and sentiment of the nation. We aren’t official pollsters, so we didn’t try to predict winners or losers, but we did try to understand what was going on. The day after the election was called we ran a survey looking at voting intentions and we repeated it just before the election.

Here is a fascinating stat for you, extracted from all the data:

So what on earth does this mean for the insurance industry?

Probably not what you think. In about 11 months’ time the GDPR regulations will come in to force. These regulations require insurers to gain explicit consent from prospects customers and former customers if they wish to continue to use their data.

This requirement for explicit consent means that vast quantities of insurance customers will need to be “repermissioned”. You are going to have to ask them if it is ok to keep their data on file.

For existing customers this is probably easy, you might even have a legitimate purpose for doing it, which creates a legal loophole. But for previous customers or even previous prospects, you will either have to regain their consent to keep their data or potentially delete it. We call 25th May 2018, “Delete Day” for that very reason.

The penalties for not gaining permission are high: consumers will have to consent to you storing their data or you risk a fine of up to 4% of global turnover or £16.5m.

Our research has found that there are 3 factors that drive consumers’ willingness to say “Yes” to you keeping their data. Reward, trust and data security. They are gated and play out in that sequence. In other words, consumers need to feel there is something in it for them first, before they consider whether they trust you with data security. Trusting you with their data is not enough on its own.

And this is where Jeremy Corbyn can teach you a lesson. His entire campaign was fought on similar lines. Corbyn’s focus was to make the young and the less well-off feel that they would be taken care of, there was something in it for them. He played up the argument that you can’t trust the Tories. And he even had a novel approach to security.

It doesn’t matter whether anything that he said would be achievable in office, that can be debated in other places. What matters is that millions of people got out of their chairs walked to a polling station and put and X in the box marked Labour.

What matters even more is that the Conservatives took the same approach that insurers take. They totally failed to connect with voters, they failed to engage people or make them feel like they would be rewarded under a future Tory government. They focused on security and trust, and largely ignored reward.

In less than a year insurers will be asking consumers to put a tick or a cross in a box that says it is ok for them to keep the data of a consumer. If they are going to succeed then they have to be able to connect with consumers, make them feel like there is something in it for them, or suffer the same ignominy and pain in business that Theresa May is seeing in politics. Ignoring the view of the people or, worse, taking it for granted, is not a winning strategy, Theresa May has shown you that.

Learn to connect, make it worthwhile for consumers to vote in favour of you communicating with them and you succeed. Treat this as an exercise in compliance or risk and you fail.

This is also the most incredible opportunity. Those organisations that get it right and which are able to get consent from their customers will have a substantial competitive advantage. Whether you see this as the opportunity or threat of a lifetime one thing is clear, you can’t ignore it. 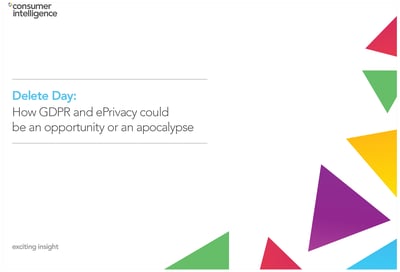 Who's Gaining Ground In Home Insurance?