Reluctance to return to public transp...

One In Five Doubt They Will Wear A Poppy This Year

Nearly one in five adults are unlikely to wear a poppy to mark Remembrance Day this year including nearly one in three under-25s, a nationwide study from independent researchers Consumer Intelligence shows.

Their main objection is that they feel bullied into supporting the appeal, but around a fifth of those who object to poppies say they believe the Remembrance symbol glorifies war. One in six oppose current military action by UK armed forces.

The study also highlights ongoing support for the Appeal, which last year aimed to ‘Rethink Remembrance’ in recognition of the sacrifices of a generation of veterans and service personnel. Around 32% of donors plan to give more for the Poppy Appeal this year.

It also underlined acceptance of different views on the Poppy Appeal — just 29% of adults believe poppies should be compulsory in the run-up to Remembrance Day, which falls on Sunday November 12th this year.

The Poppy Appeal has been the subject of controversy in recent years with a debate raging around wearing white poppies to symbolise pacifism, and criticism of politicians for not wearing poppies.

Consumer Intelligence’s research found one in 12 people (8%) have suffered hostility from others for wearing poppies, or experienced arguments. Around one in 20 parents say they would not encourage children to wear poppies in case they are targeted.

Ian Hughes, Chief Executive of Consumer Intelligence said: “The Poppy Appeal commands widespread support and raises huge sums but not everyone agrees with it or backs it.

“It is interesting however that tolerance of those who oppose poppies is so high with most people accepting it is a matter of personal choice.” 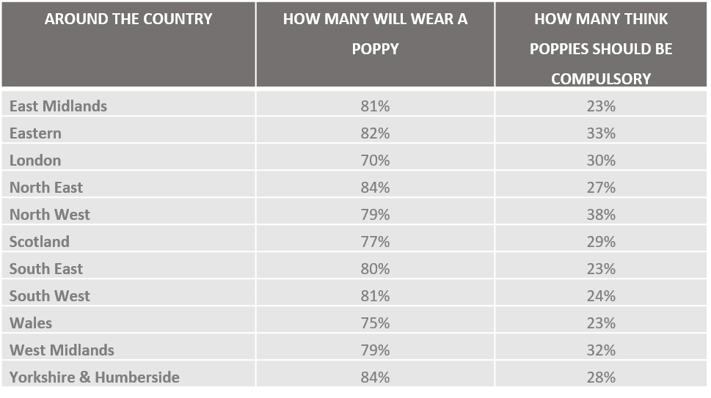 What's The Toughest Job In Insurance For 2018?