The deadline is looming on the horizon. It’s 11 months until brands could be forced to delete all the data they hold on former customers and prospects (and possibly even current customers) when The General Data Protection Regulation (GDPR) becomes law.

Consumer Intelligence’s research has found that none of the main insurers are currently compliant with the incoming regulations, meaning that unless big changes are made, insurers up and down the country could lose millions of customer files on 25 May 2018 unless they gain fresh permission to hold onto their details.

Just as insurers are seemingly behind the curve when it comes to being ready for GDPR, consumers are equally unprepared for the incoming changes

“Consumers are completely oblivious to what GDPR is, and the real concern has to be that it jumps out and scares them a year from now,” CEO Ian Hughes says. “The most damaging thing that will ever happen between a brand and its customers is getting this wrong.”

The most important thing

Worryingly, a survey of more than 1,000 consumers by Consumer Intelligence found that less than a third (32%) of insurance customers would be ok for their insurer to keep their information after they leave for ‘legitimate purposes’.

Between now and then, the most important thing will be working out how to increase this number, and to do so in a compliant manner.

The biggest factor influencing a consumer’s decision to give consent to receive marketing information is the customer’s perception as to how safe their data is in the hands of their insurer.

Hughes says that this demonstrates how insurers need to focus on gaining the trust of their consumers in their permission statement messaging if they are to continue to operate successfully under GDPR.

“Insurance, fundamentally, is all about trust and insurers who cannot gain that from a consumer will suffer under GDPR,” he says.

“Our research has shown that brands that are regarded as trustworthy and able to keep their customers’ data safe are up to twice as likely to gain consent from their permission statements”.

“That alone should go a long way in demonstrating to insurers the importance of gaining the trust of their customers in their messaging.”

Getting permission from customers and prospects

Here are our five steps to getting permission from customers and prospects aligned with the GDPR: 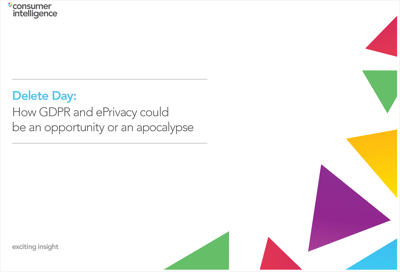 What Insurers Can Learn From Jeremy Corbyn