The price comparison websites which cut their teeth on simplifying the shopping around process for insurance customers are increasing their efforts to do the same for gas and electricity buyers.

GoCompare’s acquisition of energy comparison and switching site EnergyLinx for £10m last month was the latest consolidation of the sector, following uSwitch’s money.co.uk purchase and Moneysupermarket’s planned acquisition of Decision Tech, as larger PCWs look to capitalise on their brands and grow through broadening the services they offer.

Insurance and energy companies have much in common when viewed through the eyes of the consumer. They’re a mandatory purchase with a penchant for offering better prices to new customers. But there are differences in consumer levels of trust and in shopping habits which PCWs can make the most of and learn from.

Here are four insights from our research that illustrate the market and the opportunities it brings.

Shopping around and PCW usage for energy is not as habitual as is it for car or home insurance, suggesting there is ample room for the market to grow.

Our figures show that almost 4 in 10 consumers have either never switched energy provider or haven't switched in the past two years.

When was last time you switched energy providers? 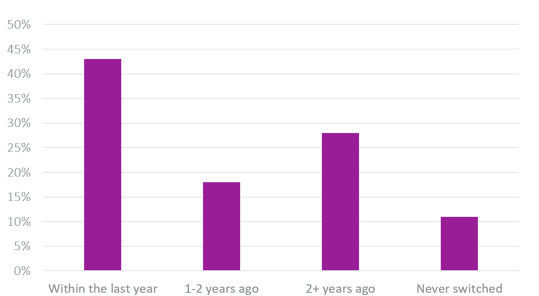 Promisingly for PCWs, the younger the customer, the more likely they are to have switched in the past year.

Saturation of PCWs is lower for energy than insurance too. Some 68% of consumers said they had used a PCW to find their current energy supplier, compared to 72% who reported using a PCW to find their current insurance provider. Furthermore, 78% said they would consider it in the future. Only 3% ruled in out entirely. That’s a lot of potential customers — many of whom, of course, will already be using a PCW for some of their other financial needs.

“For various reasons, including a lack of confidence at critical moments, switching energy providers has never quite taken off in the same way that switching insurers has,” says Consumer Intelligence Key Account Director Phil Paterson-Fox. “There is definitely a potential opportunity for a price comparison website to steal a march through re-engineering the current energy switching process, making it simpler for consumers.”

In both energy and insurance markets, consumers are more trusting of the company they are with than the competition which is likely to one of the current suppressants of switching. Some 55% broadly trust their existing energy provider compared to a 30% level of faith in the rest. Insurance trust stands at 61% and 36%, respectively — similar ratios, but overall consumers have more faith in insurers.

How much do you trust these companies general? 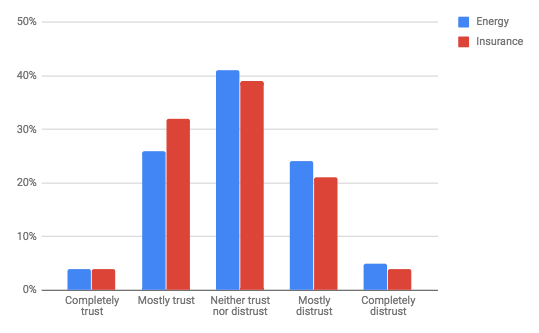 When consumers purchase direct, 25% think insurers will give them the best deal — perhaps not so surprising given the prominence of direct brands like Aviva and Direct Line in the space — compared to just 17% who feel energy companies will do the same.

For PCWs, that’s an addressable market of five in six consumers. They have a reputational head start, too, with 62% of consumers saying they trust PCWs to find them the best energy deal — slightly more than for insurance (60%).

Who do you trust to give you the best deal? 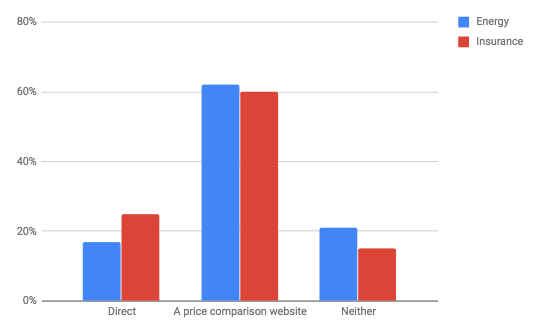 There’s a difference between wanting something and making it happen. Despite 60% of consumers saying that having the best energy deal is ‘extremely important’ to them, we found that just 13% were ‘extremely confident’ they had the best deal.

Do you have the best energy deal? 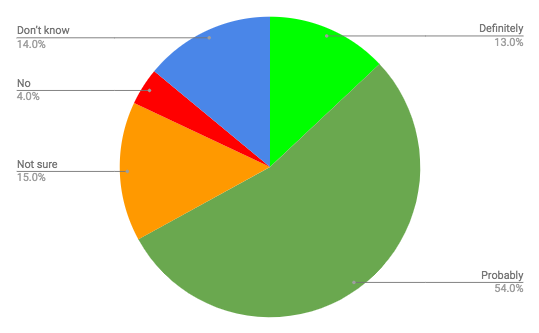 According to Paterson-Fox, this disconnect is driven by “a low level of consumer confidence, which is often missed given customers generally seem to think they understand what they are buying — regardless of whether they actually do.”

The average punter has a 23% level of confidence they understand their energy policy well. Those with the highest confidence are the under 35-year old men at around 34%. 65% of consumers say their understanding is quite good or better. 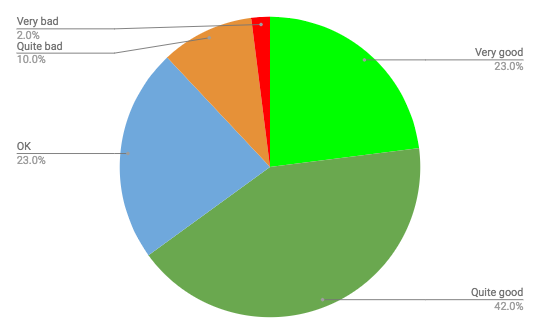 “Considerable variance in levels of policy understanding is accompanied by relatively low levels of confidence that they are saving as much as they possibly can,” Paterson-Fox adds.

Consumer attitudes to insurance show a similar pattern, although we have recently observed that buyers often have either a false sense of confidence, or that this confidence falters when dealing with more complex areas of their policy.

The common perception of the energy sector from a price comparison perspective is that it is dominated by uSwitch and Moneysupermarket.com. While our figures confirm these are ranked 1 and 2, with 42% and 41% of consumers having used them to find their current tariff, Comparethemarket.com are not far behind with 38%.

Go Compare is next on the list with 25%. The Energylinx deal could help it catch up.

The prevalence of consumer champion sites such as Which? and Moneysavingexpert.com also show that channels addressing not just the concerns of tariff type but also helping consumers navigate other barriers to switching — such as using an unknown challenger brand or fear of disconnection — are linked/used by consumers in this space.

Which websites have you used to shop for energy? 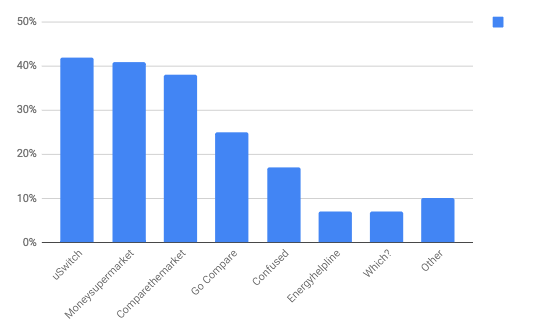 For Price Comparison Websites, this means understanding the barriers to switching, how to convert the lost opportunities, and where competitors are gaining traction.

Contact us to see how consumer insights can help your team.

Loyalty Can Pay For Insurers

Loyalty Can Pay For Insurers

The Competition and Markets Authority this week published the findings of its investigation into concerns that people wh...

Back in 2014 the FCA issued a warning about add on insurance products. With the buyer’s attention on the main product, t...

Our purpose is to empower financial services providers to see the world through their eyes of their consumers, and so ma...