Nearly 18 months after requiring brands to prompt customers to shop around at renewal, the Financial Conduct Authority (FCA) is as worried as it ever was about insurers charging new customers less than existing customers.


Launching its market study last week, the FCA voiced concerns that “general insurance pricing practices have the potential to cause harm to consumers, particularly those who are vulnerable.”

At Consumer Intelligence, we’ve been saying for a long time that there is no easy market solution for what has unfortunately become a common industry practice.

Regulatory action could be the thing that fixes it. Because hate it as much as many insurers do, there’s a commercial disincentive for insurance brands to give up on cheaper rates for new business.

Dual pricing is not a deliberate and calculated attempt to rip off loyal customers. It’s often a by-product of having introductory rates in a market with high customer churn. It’s the perfect vicious circle.

Most businesses make no money in the first year. Just take a look at this chart, contained in the FCA’s study of 18 firms, representing 40% of the home insurance market.

Brands are pricing new business as much as 30% below cost, and aim to break even after 2 to 3 years. 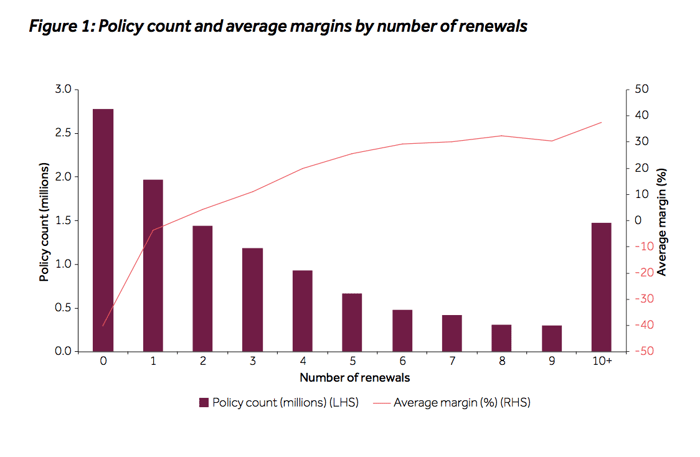 Insurers would love to get off that merry-go-round.

But how? If they give the same low rates to renewing customers, they’re out of business.

Go the other way and offer higher prices to everyone, they lose volumes for as long as other brands continue to offer cheap introductory rates.

The regulator has to navigate a balance between encouraging competition and preventing the exploitation of the vulnerable.

Some of the remedies the FCA is considering — such as an outright ban on dual pricing — could end up pushing up prices for savvy consumers in the interest of fairness.

When we asked 1,000 consumers what they thought of dual pricing, it is clear that it’s doing the industry’s reputation no favours. But also that many feel it is a problem in consumers’ own gift to navigate.

What’s in a name?

Is dual pricing about introductory rates, or about milking loyal customers for as much as possible? And if it’s the former, would better communications help shift consumer perceptions and expectations?

In our survey, we asked customers about some of the remedies the FCA is considering.

Framing the questions in a different way reveals that public attitudes are far more supportive to introductory offers:

Clearly, society is more accepting of cheaper deals to new customers than of charging more to loyal ones. Even though they’re two sides of the same coin.

Some enjoy the affirmation of shopping. Indeed 38% of those who shopped around at renewal said they enjoyed it.

Consumers were also largely unsupportive of the idea mooted by the regulator of requiring renewals to be conducted during a single week for all consumers, in order to raise the issue in the national consciousness and increase competition.

They were more supportive of amplifying the shop around message in other channels, and of banning automatic renewals.

All roads point to a measured solution. Over to you, FCA.

With the overall size of the UK general insurance market remaining relatively flat over the past few years, insurers recognise that growth for individual brands must primarily come from taking market share from other brands whilst maximising the retention of their existing customer base.

Based on analytics of 50,000 real insurance customers, we have been able to determine that profitable growth is driven by a focus on renewals and that there is a proven link between brands with strong retention rates and high levels of customer engagement.

These unique insights have been compiled into a powerful and concise free white paper report, available from the link below.

Flexible And On-Demand Insurance in the UK: What Do The Regions Think?