Car insurance premium rises have slowed in the past year and even went into reverse in the past six months, new analysis1 from insurance research experts Consumer Intelligence shows.

Its data shows the average most competitive premiums rose by 7.5% in the year to February to £740 but have dropped by 3.4% since they peaked in September last year. Prices have in fact fallen for five consecutive months — the first time since Consumer Intelligence records began.

Under-25s have seen average car insurance bills fall slightly over the past year by 0.6% as black box technology —so-called telematics — which rewards improved driving, helped insurers cut prices. Around 59% of the most competitive quotes for under-25s come from telematics providers.

But progress on Government plans to limit whiplash claims and confirmation of the new discount or Ogden rate, which sets pay-outs for major personal injury claims, of between 0% and 1% should help limit increases.

Over-50s drivers are suffering the biggest increases in premiums at 9.7% but still pay average prices of just £404 a year compared with £1612 for under-25s. Motorists in London pay the highest premiums at £1,041, which is nearly double the lowest at £557 in Wales.

“Average premiums are still 28.6% higher than in October 2013 when our records began but with progress on whiplash reforms and the Ogden rate, this year should be more positive for motorists.

“The big driver for car insurance, however, is claims experience and costs with the biggest impact being felt in major urban areas where crime rates are higher.”

The table below shows the average premiums and increases over the past year across the country. Drivers in Scotland are experiencing the highest price rises at 12.6% while motorists in the North West see the lowest increases at 2.8% although they pay the second highest annual premiums in the country.

Premiums across the UK 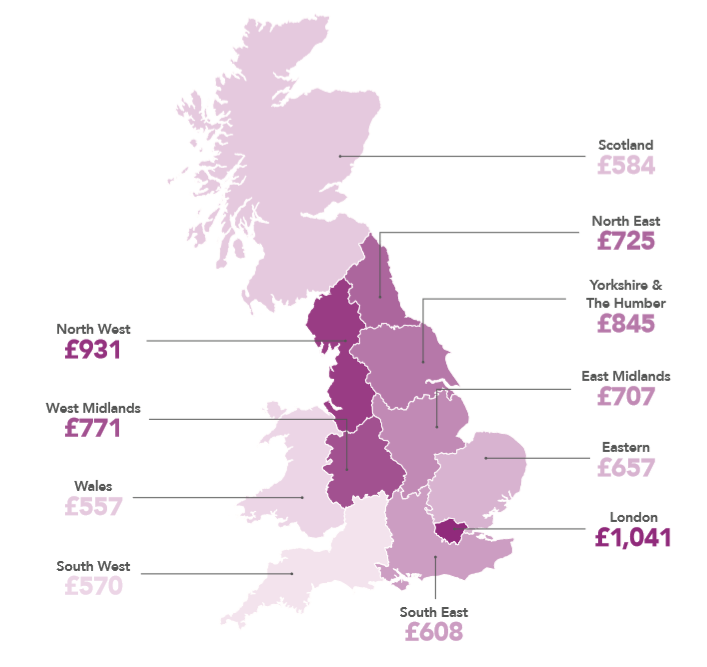 Download our Car Insurance Price Index to gain insight into market movements, benchmark the major home insurance brands and help you understand the data behind the results.

¹The cheapest premiums were calculated by comparing the prices offered for 3,600 people by all the major Price Comparison Sites and key direct insurers. The top 5 prices for each person were compared to the previous month’s top 5, then these variations averaged to produce the index.

Average bills are 3.1% lower than four-and-a-half years ago Prices are falling fastest in Wales and the North East but p...

Average prices drop 8.5% in a year but start to edge up Telematics policies are helping drivers control costs