It’s (almost) official. If media reports are to be believed, Amazon is in the advanced stages of making its long-awaited move into the UK insurance market. According to Reuters, three industry executives have confirmed that they are in talks about joining an Amazon-owned price comparison website (PCW). On the face of it, it looks like a no brainer – Amazon have a strong brand that commands loyalty, they have huge amounts of customer data (particularly around consumer buying habits) and they have the capital reserves to make any move into this space count.

The most obvious immediate markets for Amazon would be home and motor but it would appear from the latest Consumer Intelligence analysis that the loyalty Amazon enjoys among retail customers will not necessarily transfer over to any financial services offering.

When asked if they would consider buying home insurance through Amazon, only 43% said they would.

Interestingly, there is a rather sharp gender divide here with 52% of men saying they would consider it versus only 37% of women with similar results seen in motor. 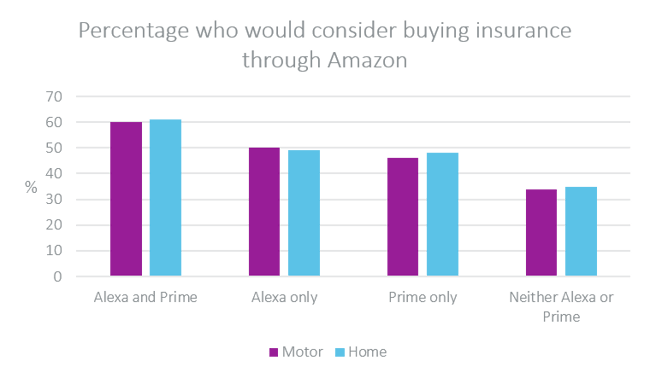 In addition, there is a real, almost counter-intuitive difference in sentiment among age groups. Our research shows that among 18-24-year-olds (arguably a natural market for a digital business), only 33% would consider buying motor insurance through Amazon. However, the willingness to consider increases with age (25-34: 43%, 35-54: 48%, 45-54: 51%) but drops off significantly among the over 55’s. 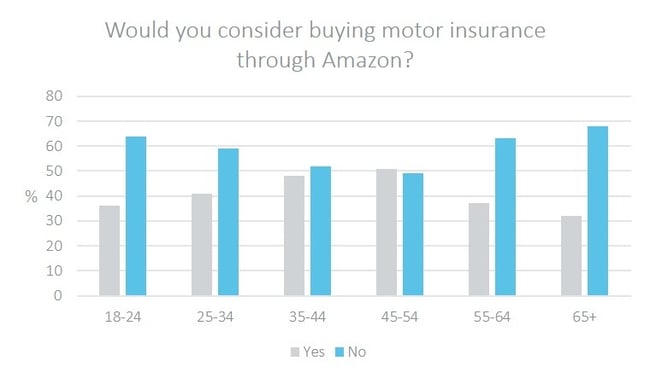 A near identical pattern is seen in home so even with the mountains of data, brand recognition and existing customer loyalty, it would seem that Amazon’s impact upon the UK insurance market is not a foregone conclusion. Although willingness to consider Amazon only tips in their favour within the 45-54 age range, our research shows there are other consumer segments that may act as an initial sweet spot for Amazon.

When we spoke to Amazon ‘super fans’ (people who had Alexa and were subscribers to Amazon Prime), perhaps predictably their willingness to buy insurance through the retailer increased markedly.

For motor, 60% of super fans would consider buying through Amazon with a similar percentage (61%) willing to consider the on-line retailer for their home insurance (again, the results are almost identical for both motor and home). A near-30 point differential between super fans and neutral consumers is nothing to be sniffed at and it is likely that were Amazon to pull the trigger on setting up a PCW, it would be these loyal customers who would be targeted first. 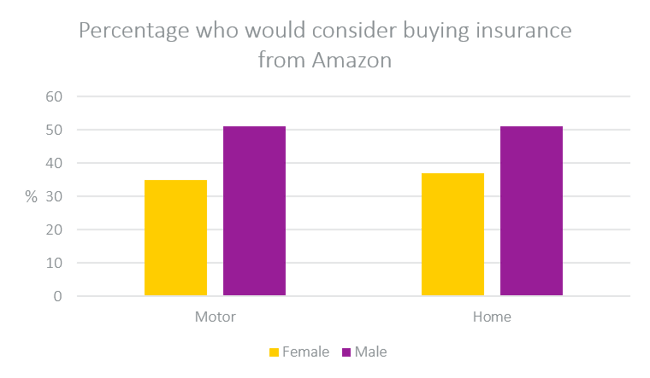 However, considering a provider for insurance and actually handing money over are two entirely different things and Amazon has a few significant hurdles to negotiate before success can even be considered.

The first is that any new PCW would be entering a marketplace that has long been dominated by the big four – Comparethemarket, Gocompare, Moneysupermarket and Confused. According to Consumer Intelligence’s Insurance Behaviour Tracker, these brands now provide access to insurance for just under 87% of customers who shop around. Existing PCWs are in a very strong position; they have huge brand recognition and loyalty, have longstanding relationships with insurers and brokers and have the marketing firepower to fight to maintain that position.

Additionally, one of the reasons PCWs took off so quickly and have been so successful is because they removed the chore of having to shop around manually. The majority of consumers now have all their details loaded and saved on to one or more of the big PCWs so what incentive can Amazon offer to encourage people to start that whole process again? Can they add an additional dimension of ‘friction removal’?

Likewise, insurers have a bit of a love/hate relationship with PCWs believing that they have commoditised the market and are an unwelcome added cost in the value chain. The three executives quoted by Reuters aside, can Amazon really count on insurers to be scrambling to sign up to another major addition to the PCW landscape?

Finally, and perhaps most importantly, Amazon has some stubborn reputational issues that would have to be overcome to win the trust of consumers – press reports concerning its corporate tax arrangements, its impact on the UK high street and question marks around how it treats employees may cause some consumers to reject them as a serious and credible financial services provider.

All of this suggests that should Amazon make a play for the UK market, it is by no means a foregone conclusion they will be able to make it work. A number of other big brands have tried and failed (admittedly with contributory factors), which underlines that it’s not as easy to enter and compete in this space as it might look at first glance! 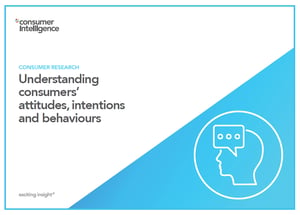 Download our guide to 'Understanding Consumer Attitudes' to learn how our output goes beyond research and data to uncover genuinely exciting insights – invaluable nuggets that can help transform your business and your bottom line.

Top 10 Predictions For Insurance Over The Next 10 Years